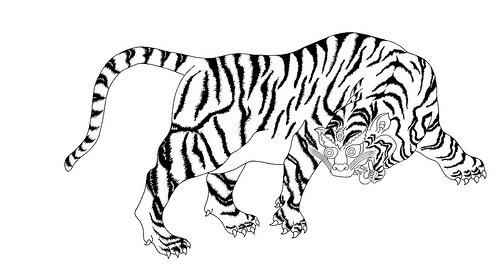 one of the four protector animals of Tibet

The tiger is associated with the visionary power of the yidam, so every yidam wears a tiger-skin skirt. The tiger is also found within the sKu-mNyé series of psycho-physical exercises. It is one of a group of five animals associated with the five elements: lion (earth), vulture (water), tiger (fire), eagle (air), and garuda (space). When Dorje Tröllö (the most wrathful of the Eight Manifestations of Padmakara) rides a tigress, she is the manifestation of his consort Tashi Chhi’drèn. The sky-tiger was also a pre-existing Bön yidam.

Male and female tigers can represent the enlightened quality of fierce playfulness – rolpa’i trö (rol pa’i khro). A sense of utter seriousness pervades the common idea of playfulness resulting in a dynamism which Ngak’chang Rinpoche describes as ‘savage aplomb’. The tiger as protector relates to the ‘protection’ of the texture of one’s life as a tantric practitioner. One is willing to take risks and willing to be alive to the fullest extent in every situation. A male tiger protects us from our comfort-seeking, and a tigress protects us from our neurotic sensitivity. The image of the tiger is highly prevalent within the Aro gTér lineage, and all the lineage Lamas are portrayed as sitting on tiger skins or riding tigers.